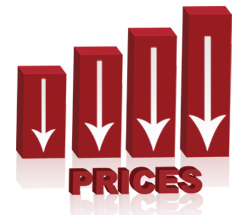 U.S. home prices fell in most major cities for the second straight month, further evidence that the housing recovery will be bumpy.

The Standard & Poor’s/Case-Shiller index released recently showed prices dropped in October from September in 19 of the 20 cities tracked.

Prices in a majority of cities declined for the second straight month, reflecting the typically fall slowdown after the peak buying season. Prior to that, prices had risen for five consecutive months in at least half of the cities tracked.

The Case-Shiller index covers half of all U.S. homes. It measures prices compared with those in January 2000 and creates a three-month moving average. The monthly data are not seasonally adjusted.

Americans are reluctant to purchase a home more than two years after the recession officially ended. High unemployment and weak job growth have deterred many would-be buyers. Even the lowest mortgage rates in history haven’t been enough to lift sales.

Some people can’t qualify for loans or meet higher down payment requirements. Many with good credit and stable jobs are holding off because they fear that prices will keep falling.

Sales of previously occupied homes are barely ahead of 2008’s dismal figures — the worst in 13 years. And sales of new homes this year will likely be the worst since the government began keeping records a half century ago.