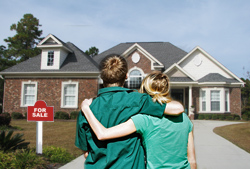 Consumer expectations for U.S. home prices perked up in December, matching a modest fourth-quarter improvement in the U.S. economy, according to a monthly survey from mortgage market firm Fannie Mae.

For its December reading, Fannie Mae said survey respondents now expect home prices to rise by 0.8% over the next year, up from the 0.2% gain predicted in November.

Views on the direction of the U.S. economy also improved: 22% of respondents indicated a belief that the U.S. economy is on the right track, marking a 6-percentage-point jump from November’s survey.

Despite the marked improvement in consumer sentiment, Fannie Mae Chief Economist Doug Duncan cautioned that consumer attitudes remain at depressed levels, with over two-thirds over respondents in December’s survey still indicating a belief that the U.S. economy is headed in the wrong direction.

The survey is based upon a monthly poll of roughly 1,000 adults and has a margin of error of plus or minus 3.1%.