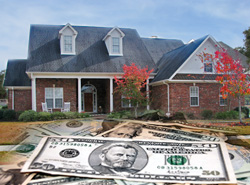 Slightly over half of all homeowners say their homes are worth more today than they were when they bought them, according to a new national survey conducted just before Christmas.

Most homeowners are confident they know what their home is worth, and a greater number than ever, some 29 percent, believe that they have lost value since they bought it.

An earlier Rasmussen national telephone survey conducted in early November found that just 12 percent of U.S. homeowners now expect the value of their home to go up in 2012.

The survey of 690 U.S. Homeowners was conducted December 19th & 20th, 2011 by Rasmussen Reports. The margin of sampling error is +/- 3 percentage points with a 95% level of confidence.

Are you a homeowner? If so, do you think your home is worth more than when you bought it? We’d love to hear how you feel about your home’s value. Leave us a comment by clicking the comment link below. Your email address will never be shared on this site.