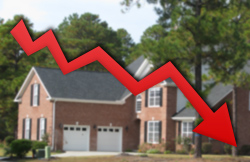 Five consecutive years of declining home values have taken its toll on the country, with homeowners shouldering the brunt of these losses. In 2010, home values fell a collective $1.1 trillion according to Zillow, but in 2011 those losses have eased with Zillow estimating that home values fell by approximately $681 billion or 5.1 percent.

One hundred and twenty-eight metropolitan statistic areas are tracked by Zillow, with nine showing gains for 2011.

Offering comment on behalf of Zillow was the company’s chief economist, Stan Humphries, who stated, “While homeowners suffered through another year of steep losses, the good news is that homes are losing value at a substantially slower pace as the market works its way towards the bottom. Compared to last year when we saw sharp declines following the expiration of the homebuyer tax credits, this year we saw some organic improvement in home values, in terms of a slowed depreciation rate which resulted in a smaller total value loss for the year.”

Humphries added that the losses are not over yet noting that the “…unabsorbed pool of housing supply, dragging levels of consumer confidence, high unemployment and negative equity will continue to put downward pressure on the housing market…” and may push off the recovery until late 2012 or early 2013. A delayed economy will likely have a huge impact on next year’s general election with Barack Obama seeking a second term and a Republican hopeful working to send him home.

For homeowners who have seen their home values slide substantially since 2007, the recovery cannot come soon enough. Positive local conditions in some areas demonstrate that prices can stabilize and even rise. But prices can vary dramatically from neighborhood to neighborhood, something buyers, sellers and refinancers should consider and obtain local comps for accurate localized information.